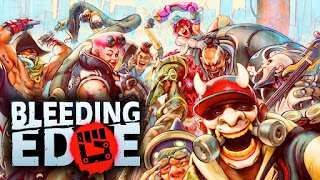 During Microsoft's E3 presentation, Ninja Theory took to the stage to unveil Bleeding Edge. Bleeding Edge is a 4V4 multiplayer brawler that features a cast of characters with a variety of strange and colorful heroes, who fight it out in close quarters with different powers.
Bleeding Edge doesn’t have a release date at this time. You’ll be able to try the game for yourself when the technical alpha begins on June 27. Go to the games website to sign up.