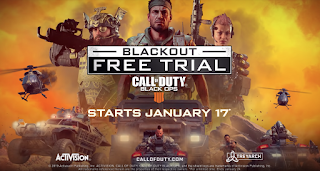 Activision has announced that later this week you’ll be able to try out the Blackout mode for Call of Duty Black Ops 4 during a free week. The free week is for all platforms (PlayStation 4, Xbox One, and PC) starting on January 17 until the January 24.

Bring your friends — the Blackout Free Trial is coming.

Play #BlackOps4’s Blackout Battle Royale for free from January 17th to the 24th on PlayStation 4, Xbox One and PC. pic.twitter.com/jfOw2diCV9
— Call of Duty (@CallofDuty) January 15, 2019