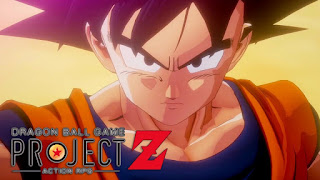 Bandai Namco has announced that Dragon Ball Project Z is an RPG set in the world of Dragon Ball. Project Z will be retelling the classic story of Dragon Ball Z from the beginning. The trailer showed off several scenes from DBZ in a 3D cel-shaded style.
A press release for the game added some additional details that weren't clear in the trailer. The game will be an action-rpg, and you will play as Goku. It is coming to PlayStation 4, Xbox One, and PC and It is being developed by CyberConnect2 (known for the Naruto Shippuden series). It should be noted that Dragon Ball Project Z is only a code name for the game.