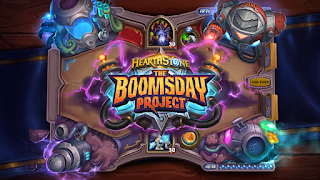 Blizzard has announced Hearthstone’s next card expansion,The Boomsday Project. It will be launching on August 7. Themed around mechs and led by Dr. Boom, the Boomsday Project will add 135 new cards, as well as a new single-player puzzle mode called The Puzzle Lab.
Each class will be getting a legendary spell card. A new keyword, Magnetic, is also being introduced, allowing players to merge mech minions to combine their stats and abilities.The Boomsday Project also introduces two new groups of cards: Projects and Omega cards. Projects are cards that benefit both players, while Omegas are normal cards that get a huge boost if you have 10 mana crystals when you play them.
Instead of having a boss fight-style single-player mode like the last two expansions, The Boomsday Project will introduce a new mode called The Puzzle Lab. If it’s anything like other card game puzzle modes, players will likely be faced with specific, set scenarios and have to figure out how to use the cards available to them to accomplish some goal.
Players can pre-order bundles of 50 or 80 Boomsday Project packs starting today for $50 or $80, respectively. Both sets include a free golden legendary card and the exclusive Mecha-Jaraxxus card back, and the 80-pack bundle includes Mecha-Jaraxxus himself as a new playable Warlock hero.