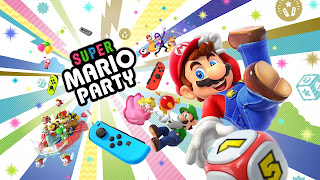 As the latest game in the Mario Party series to hit the Nintendo Switch, Super Mario Party will feature over 80 new minigames. During the Nintendo Treehouse stream at E3, fans were shown a range of minigames and a new mode called Toad’s Rec Room.
Mario Party fans will be pleased to know that size-able 3D board games are back in play and you’ll be able to adjust the length of time you and your friends want to play a board before beginning. There are also some new items on show too, such as the Golden Drink and the Coinado, which add an extra move space to your dice roll, or steal coins from other players, respectively. The select-a-minigame Freeplay mode is also back to let the good times roll, with the Nintendo Treehouse team showing Slaparazzi, Smash and Crab, Sizzling Stakes and an intense race to the finish line in Trike Harder.
In an interesting twist, Super Mario Party also brings a new mode to the surface in Toad’s Rec Room. This special mode allows players to collaboratively hook up their switch consoles to challenge each other to connect the images together on the screen. A neat way to pass the time on the train or a plane, no doubt. Super Mario Party will be available on the Nintendo Switch on October 5.