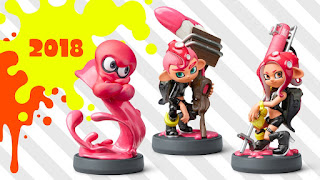 During the Nintendo E3 2018 Treehouse stream,
Nintendo has revealed that a set of Octoling amiibo  will release later this year. The Octoling amiibo is part of a Splatoon 2 3-pack that includes a Octoling, an Octoling Boy and Octoling Girl.


Look out Inklings, there’s a new kid on the block! The #Splatoon2 Octoling #amiibo arrives as a 3-pack this year! pic.twitter.com/i5KXdeTF4R
— Nintendo of America (@NintendoAmerica) June 12, 2018

UPDATE 7/23/18 - Nintendo has announced that the  Octoling amiibo 3 pack now has a release date of December 7th in North America. It's weird that the amiibo pack is releases the same day as Smash Ultimate, but Nintendo does have a habit of releasing amiibo the same day as a game. Thoughts ?