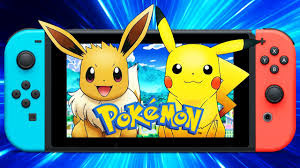 Eurogamer is reporting that Pokemon: Let’s Go Pikachu! and Pokemon: Let’s Go Eevee for the Nintendo Switch will feature mandatory motion/gyro controls in docked and handheld mode. When playing in handheld mode you are still required to move your system around to aim, but to throw a Pokeball, you thankfully just have to press a button. Here’s exactly what the publication was told via a statement:
“In handheld mode with both Joy-Con attached – you are still required to move around to aim, but you press a button to throw the Pokéball.
“It is not touch screen like on a smartphone because the Switch is quite a bit heavier than your smart phone.”

The Pokemon Company also told the site that the region of Johto will not be a bonus feature in the game (as it was back in Gold and Silver). If true this is a massive disappointment as this would make the game hard to play in handheld mode. We’ll just have to wait and see what happens when the game releases in November. Thoughts ?