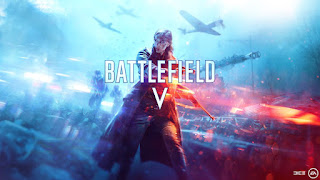 EA and DICE have revealed Battlefield V to the world. During the real event we learned that the game is returning to World War II. One of the the biggest unifying theme in Battlefield V is the move away from abstraction. You no longer just move into an area and get automatically healed by a magical aura. Reviving allies is also an involved, animated, and much more personal process so that both the healer and the wounded can appreciate the intimacy of their situation.

Battlefield V introduces two major new game modes.
One is called Grand Operations, which will be an epic, historically inspired, multimatch, multiplayer mode. The first mission sees the player landing as a paratrooper behind enemy lines, tasked with taking out anti-aircraft artillery points. The second day in Rotterdam is when the main invasion force has landed, and you’re trying to reclaim more sectors of the city from the occupying force. Day three moves things deeper, into the devastated, bombed-out parts of the city, and that’s where you can claim a decisive victory. Day four in Grand Operations is called the Final Stand, and it fully embraces the scarcity idea. You get one life, one primary weapon with limited ammo, and you basically fight to the death. By this point, each player will have invested more than an hour into the contest, so the sense of a high-stakes battle for glory will be proportionately amped up. Tides of War is the other new mode. This is Battlefield V’s continuous online campaign mode, which revolves around assembling your own roster of soldiers, each of them customizable to a ridiculous degree of personalization (weapons, attire, perks, abilities, and more). Both the narrative and gameplay evolve as you keep participating in more missions, and you’re incentivized to do so in order to obtain loot and rewards to pretty up your soldiers some more. Tides of War will also offer free maps updates as EA is moving away from the season pass model. The deluxe edition of the game goes on sale on October 16th for Xbox One One, PlayStation 4, and PC, while the standard edition will be available on the same platforms on October 19th.

UPDATE - Electronic Arts is delaying Battlefield V from October 19 to November 20. In a blog post, general manager of developer EA DICE, Oskar Gabrielson, says that the delay is being made due to feedback that the team has gathered so far from closed alpha sessions and from conventions like the recent Gamescom show. Gabrielson adds "adjusting the gameplay tempo, improving soldier visibility, and reducing player friction”.