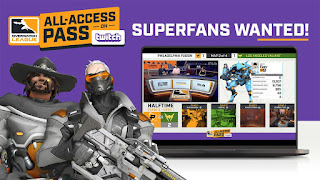 The Overwatch League has announced an All-Access Pass on Twitch for all things Overwatch League.
For the 2018 OWL season, the $29.99 pass is "an evolving VIP badge" that gives fans perks that include:

The first three listed incentives can be tried out for free until May 15.