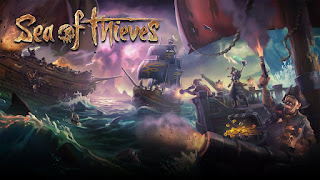 Sea of Thieves has had a rocky launch, but developer Rare is attempting to correct course as executive producer Joe Neate and design director Mike Chapman outline in a video update detailing Sea of Thieves' future. The two discussed how the next month will be focused on addressing major fan feedback first, which informs how the team broaches new content down the line. Some of these design philosophies include offering more goals and rewards for exploration, more emergent events taking place during PvP and PvE, and expanding the ways players can become Pirate Legends and what they can do beyond that status.

Diverse weekly events are in the works that reuse mechanics and portions of the world in new ways, granting rewards for your efforts to explore as well. Beyond this goal, the first content update in May will unveil The Hungering Deep, which will encourage players to band together against a mysterious new threat. Summer will see the release of Cursed Sails and Forsaken Shores, which offers new enemy types that rock the proverbial boat. Three more free updates are scheduled for the fall and winter. Thoughts ? will this bring you back to Sea of Thieves ? Depending on the content, I would definitely could get back into Sea of Thieves.