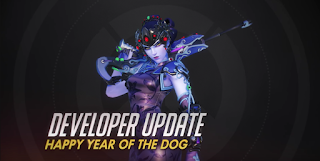 In a developer update video, director Jeff Kaplan outlined what changes are being made for the Year of the Dog event. The first major addition is a new map in Thailand, the first of its kind as it's built specifically for Capture the Flag. Kaplan also said that CTF mode can no longer end in a draw.
“We know historically every time we’ve had draws in Overwatch, there has been discontent in the player base and we want to get rid of draws," Kaplan explained. "We know that they’re not very exciting and they can feel very anticlimactic. So, we’ve added a Sudden-Death mechanic if the two teams are tied at the end of time; what will happen is both teams flags are moved closer to the center of the map and then the map resumes at that point and the teams will go for the flags and then they only have a very short distance to cap."


Additionally, there are moves that drop the flag if used while holding it, typically moves that grant you great mobility or invulnerability. Kaplan points out that Winston's leap, for example, still leaps but drops the flag before takeoff, ensuring players have to go back through enemy lines to bring the flag home. There will also be a 4 week competitive season around Capture the Flag this year, much like Lucioball in the summer. You can check out the video of Kaplan explaining the update below.