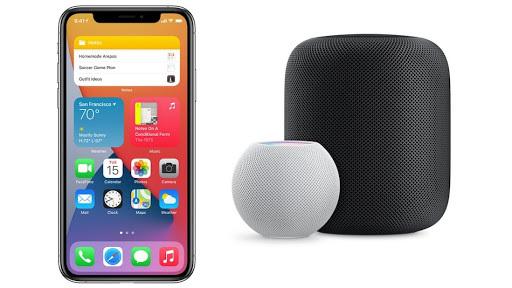 Apple has updated iOS, iPadOS, watchOS, tvOS and the firmware for HomePod devices.

iOS 14.2 and iPadOS 14.2 are available on the Apple devices by going to System Preferences —> General —> Software Update. New features include:

° Eight new wallpapers in both light and dark mode versions;

° Magnifier can detect people nearby and report their distance using the LiDAR sensor included in iPhone 12 Pro and iPhone 12 Pro Max;

° Optimized battery charging for AirPods to slow the rate of battery aging by reducing the time your AirPods spends fully charged;

° Headphone audio level notifications to alert you when audio level could impact your hearing;

° New AirPlay controls to stream entertainment throughout your home;

° Option to provide statistics about Exposure Notifications, without identifying you, to participating Public Health Authorities.

HomePod software and tvOS 14.2 work in tandem to allow you to pair two HomePods (but not HomePod minis) with an Apple TV set-top box and create home theater support with stereo, Surround Sound, and Dolby Atmos audio.. HomePod 14.2 features also include:

Users can update their HomePods through the Home app on iOS. On an Apple TV set-top box, tvOS 14.2 can be downloaded and installed via the Settings app.

The new watchOS 7.1‌‌ can be download by going to the Apple Watch app on your iPhone and selecting General —> Software Update. To install the operating system update, the Apple Watch battery needs to be at least 50%, be placed on a charger, and within range of your ‌‌‌‌iPhone‌‌‌‌.

watchOS 7.1 — which is compatible with the Apple Watch Series 3 and later — contains new features, improvements, and bug fixes, including:

° Adds the ability to be notified when your headphone audio level could impact your hearing;

° Adds support for the ECG app on Apple Watch Series 4 or later in the Republic of Korea and Russia;

° Adds support for irregular heart rhythm notifications in the Republic of Korea and Russia;

‘° Resolves an issue that prevented some users from unlocking a Mac with Apple Watch;

° Fixes an issue where the screen may be dark on wrist raise for some Apple Watch Series 6 owners.