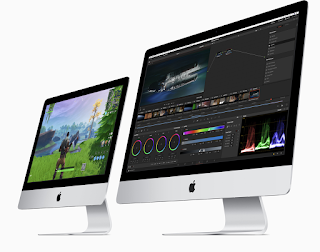 According to Apple leaker Sonny Dickson, Apple will unveil a new iMac at WWDC next week. He says it will have “iPad Pro design language, with Pro Display like bezels. T2 chip, AMD Navi GPU, and no more fusion drive.”

The “iPad Pro design” language means the design will be similar to that of the Apple Pro Display XDR and thinner bezels.


The T2 chip which controls the security of a Mac by encrypting the disk. It won’t let a person erase the SSD until the Apple ID and password of the owner are known. The T2 chip also controls disk I/O and audio, offloading these from the CPU.
Fusion Drive is Apple’s name for its implementation of a hybrid drive. It combines a hard disk drive with a NAND flash storage (a solid-state drive of 24GB or more) and presents it as a single Core Storage managed logical volume with the space of both drives combined. If Dickson is correct, the Fusion Drive will be discontinued with the iMac offered with SSDs across the line-up.
Navi is the codename for AMD's recent GPU architecture. Also, Intel announced new "Comet Lake" processors in late April that would be suitable for the ‌iMac‌. In other words, no ARM-based all-in-one until at least next year.
Starting June 22, Apple will host its annual Worldwide Developers Conference in June in a new online format “packed with content for consumers, press and developers alike.”
Posted by 9To5TechNews at 10:58 PM