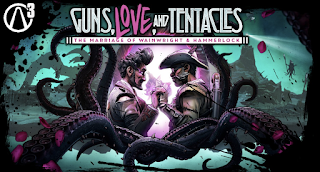 Gearbox describes the story of "a surprisingly dangerous engagement party" for Sir Alistair Hammerlock and Wainwright Jakobs on the ice planet of Xylourgos. The DLC will take you to the town of Cursehaven, which is under the carcass of Vault Monster. The DLC will also add new legendary items, Class Mods and cosmetic items.

We also saw a content roadmap of free updates and events coming soon. In April, we'll get Mayhem 2.0, described as an overhaul to Borderlands 3's endgame by changing how Mayhem modifiers work.

In May, we'll get a second Takedown, this time called Guardian Takedown. Described as the most challenging content in the game, this endgame mission will be set around the mysterious Eridians, and offer new bosses, gear, and cosmetics. It will scale in difficulty based on your party, but features a True Takedown Mode, which allows a single player to take on the mission at the hardest difficulty.