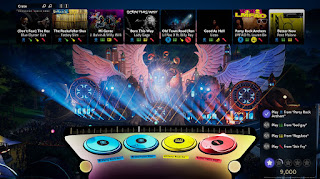 7/1/20 - Harmonix has revealed new details on Fuser. You can pre-order the game now on most platforms, will a release still scheduled for fall 2020. If you choose to pre-order, you’ll get three bonus DLC songs: Dua Lipa “New Rules,” Khalid “Young Dumb & Broke,” and The Killers “Mr. Brightside.” In addition, Harmonix is offering a digital-only VIP edition that includes entitlements for the first 25 DLC songs, along with several in-game apparel options for your DJ. You can check out participating retailers by clicking over to the game's official site. 21new songs have also been revealed. The full game will include over 100 songs.


Original article - Rock Band developer Harmonix and publisher NCSoft have announced a new music-mixing game, Fuser. You’ll play as a DJ and are tasked to blend songs in realtime into your own unique mix. Fuser offers more than 100 songs from 50 Cent, Billie Eilish, The Clash and more. The game is very similar to the Harmonix card game DropMix.