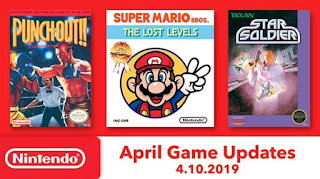 These three games join the growing library of classic NES games in the Nintendo Entertainment System – Nintendo Switch Online collection. The varied collection currently consists of dozens of games, including Super Mario Bros. 3, Donkey Kong and The Legend of Zelda, among many others. All of these NES games have been enhanced with online features and, using the power of Nintendo Switch, can be played at home on the TV or on the go.
Nintendo Switch Online members also gain access to the free-to-download software Tetris 99 as a special offer. The game includes online events like last month’s Tetris 99 MAXIMUS CUP.
Other features of the service include online play and Save Data Cloud backup in compatible games, plus a smartphone app that enhances features of supported games. To make playing NES games feel more authentic, Nintendo Switch Online members with a paid membership can purchase Nintendo Entertainment System controllers* that are compatible with Nintendo Switch by visiting https://nesc.nintendo.com/nintendo-entertainment-system-controllers.
For more information about Nintendo Switch Online, to view membership options and to learn about a free seven-day trial for new users, visit https://www.nintendo.com/switch/online-service/.