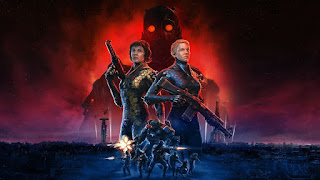 Bethesda has announced that Wolfenstein: Youngblood is coming July 26 for PS4, Xbox One, Switch and PC. Here are the details direct from Besthesda :
Welcome to the 1980s. BJ Blazkowicz is missing. His last-known whereabouts: Nazi-occupied Paris. The only ones who can find him are his twin daughters, Jess and Soph Blazkowicz—and no Nazi scum are gonna stand in their way. Liberate Paris from the Nazi threat as you search for your father in the first open-ended co-op adventure in the series, either with a friend or an AI companion.
Wolfenstein: Youngblood releases on July 26, 2019 for PC, PlayStation 4, Xbox One, and Nintendo Switch. With the Wolfenstein: Youngblood Deluxe Edition you’ll receive the Buddy Pass so you can invite a friend to join the Reich-stomping fun—even if they don’t own the game! The Deluxe Edition also includes the Cyborg Skin Pack, decking out the Blazkowicz sisters in titanium allow versions of their Power Suits, guns, combat knives, and hatchets.