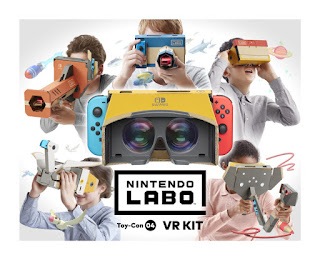 Nintendo is joining the world of virtual reality with a brand new Labo kit. Nintendo Labo Toy-Con 04: VR Kit will be releasing on April 12th. Soon, you will be able to try out “a unique first VR experience kids & families can build themselves”. We’ve provided the company’s official tweet down below.

Players that own the Starter Set can purchase the following optional expansion sets to expand their experience:


Experience a new dimension with the latest #NintendoLabo kit! With more games & creations than any previous kit, Nintendo Labo Toy-Con 04: VR Kit is a unique first VR experience kids & families can build themselves! Arriving 4/12, only on #NintendoSwitch.https://t.co/PCxm9sZSed pic.twitter.com/B21Fa2FLCQ
— Nintendo of America (@NintendoAmerica) March 7, 2019