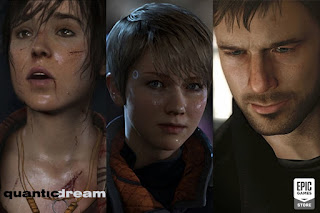 Quantic Dream and Epic Games have announced an exclusive partnership for the Epic Games Store to release the companies previously PlayStation-exclusive games on PC. Heavy Rain, Beyond: Two Souls, and last year's Detroit: Become Human will all be available on PC later this year exclusively through the Epic Games Store.

The exclusivity agreement will last for one year for each game. Quantic and Epic made the announcement during the Epic keynote presentation at GDC 2019.