Here Are The Games That Will Be Featured At EVO 2019 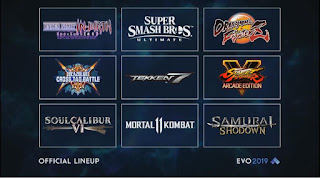 The official lineup for EVO 2019 has been revealed. 9 games will be featured at the this year’s championship series.
Surprisingly, Super Smash Bros. Melee is not on the official lineup. Melee’s first EVO appearance was in 2007, before paving the way for Brawl to shine on its own in 2008. It returned in 2013, making this the first time that Melee will not be featured at EVO since 2012.