Pokemon Discovered In The Sinnoh Region Have Arrived In Pokemon GO 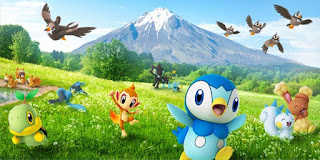 Pokemon GO fans rejoice as various Pokemon who were discovered on the Sinnoh Region are now available for capture in the mobile game. The games which the Pokemon originated from are Pokemon Diamond, Pokemon Pearl, and Pokemon Platinum. Have fun with the latest update!
“The world of Pokémon GO is evolving once again! This week, keep an eye out for Pokémon originally discovered in the Sinnoh region, featured in Pokémon Diamond, Pokémon Pearl, and Pokémon Platinum! Get ready to see Pokémon like Turtwig, Chimchar, and Piplup as they appear in Pokémon GO for the first time ever.
Pokémon originally discovered in the Sinnoh region will be making their way to Pokémon GO in waves! So, you can look forward to discovering even more Pokémon over the next few weeks appearing in the wild, hatching from Eggs, and battling in raids. Stay tuned to our official channels for updates about new Pokémon, new features, and expansions to existing features like Pokémon storage and more!”