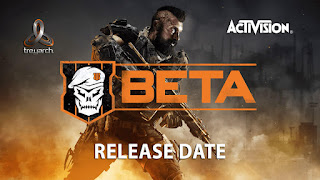 Activision and Treyarch have announced Black Ops 4 will have two betas, the first of which will start on August 3 exclusively on PlayStation 4. 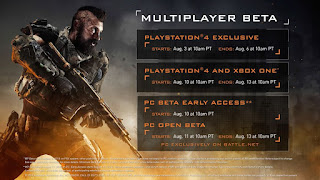 The Private Multiplayer Beta has different dates for all three platforms, including an early access date for the PC version, which will be exclusive to Activision Blizzard's Battle.net. The dates and times are as follows:

The Private Multiplayer Beta includes six maps, two of which will be debuted through the beta. Players will be able to experience the returning Team Deathmatch, Domination, Hardpoint, and Search & Destroy modes along with the brand-new Control mode. Control will have teams alternate between attacking and defending a pair of static objective points, with each team having a limited number of lives to expend in their attempt to be the first to successfully defend or capture the points three times.

Everyone who participates in the beta will get a unique, displayable calling card, and beta players who reach the maximum rank will earn a permanent unlock token they can use for any piece of Create-a-Class content they choose when Black Ops 4 launches.
Treyarch will also hold a second beta that focuseses on the new battle royale-style mode Blackout. The Private Blackout Beta will begin first on PlayStation 4 in September. Call of Duty: Black Ops 4 will release October 12 on PlayStation 4, Xbox One, and PC.