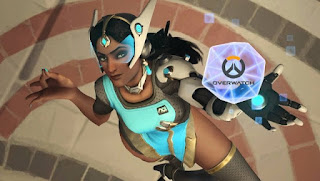 The latest Overwatch Developer update hosted by Jeff Kaplan goes into a number of new features and changes for the game in an upcoming update.
Kaplan first talks about endorsements, which allows players to congratulate team members and even people on the other team for positive interactions. If someone is being particularly friendly or adding to the game, you can give them an endorsement. If someone on your team has done a great job and helping to organize the team, they can get a special endorsement for that.
Players who endorse others get small experience bonuses, but at a limited cap per day. The people who accumulate a lot of endorsements also get other, bigger rewards periodically for being a good player. Those who accrue those endorsements can't then turn around and go negative on the community, as that behavior takes away their rewards. It is Blizzard's way of trying to mend the community through positive reinforcement.
Overwatch also soon be getting a Looking For Group feature, which has been requested for the last two years. LFG allows you to designate the kind of roles you're looking for and you can even restrict players who join your team to the roles you designate. This isn't matchmaking, it's trying to find people who you work best with.
The next update also combines offensive and defensive heroes into a new category titled simply Damage. Kaplan says these types became similar over the last two years of updates, so the change just makes official what has already been the case.
Last but certain not least, the biggest changes are coming to Symmetra, who is being reworked as a Damage hero. She's already on the Test Server with a number of changes, including an Ultimate that creates a Photon Barrier that's "big enough to span and cut through and entire map." You can check out the full developer update below.