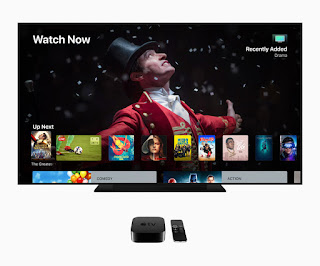 During Apple’s WWDC 2018 keynote, Apple announced tvOS 12. The Apple TV 4K already provides 4K HDR video and Dolby Vision; now sound will be amped up with support for Dolby Atmos sound. During the keynote, it was noted that all this requires to get surround sound from Apple TV 4K is a Dolby Atmos-compatible sound bar; a quick glance at Amazon shows that those sound bars aren't exactly inexpensive!
One cool thing brought up during the keynote is that a number of cable providers are now starting to use Apple TV as a cable box. CANAL + in France, SALT in Switzerland, and Charter Spectrum (coming soon) in the US are all either offering Apple TV or will offer it soon. With Charter Spectrum, that opens Apple's video streaming box to up to 50 million homes in the US.
Last year's tvOS update brought single sign-on to Apple TV; this year it's Zero Sign On. If you are getting broadband from the same company that provides your cable service, you will not need to sign onto any of the stations on your device. Automatically, the Apple TV will know what channels you have access to. For iPhone owners, once the Apple TV remote app will automatically be added to Control Center. Passwords that have been saved in iPhone and iPad in iOS 12 will be available for auto-fill on the Apple TV as well.

One of the more attractive screen savers provided by Apple is "Aerial", which shows aerial views of a number of locations around the planet in 4K HDR. Apple worked with NASA and added views of Earth from the International Space Station that will make a fascinating screen saver. You'll now be able to ask Siri "Where is this?" when viewing an aerial screen saver and get an answer, as well as swipe between locations.