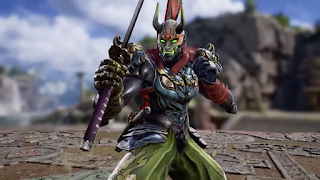 Bandai Namco has announced that Soulcalibur alumni Yoshimitsu is back with a new armor design for Soulcalibur VI . The samurai is still as strange as ever and incorporates a lot of his favorite moves from previous games. He also appears to have a super where he removes the opponent's soul. Soulcalibur VI is scheduled for release this year on PlayStation 4, Xbox One, and PC.