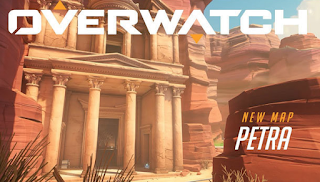 As part of the anniversary event for Overwatch , a band map will be included, Petra. Overwatch has based several of its maps on real-life cities, and if that's the case with Petra, this map takes us to Southwestern Jordan. The area seems to revolve around a central hub with a narrow ledge overlooking it, making for some exciting play potential. If you watch the brief trailer, you'll notice a lack of a payload or capture point, which means this is probably a Deathmatch map.