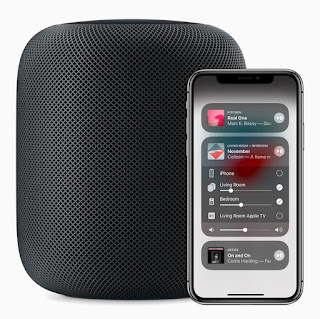 AirPlay 2 controls are available across iOS within any app and in Control Center for quick access to what’s playing in every room, on every speaker. Apple Music subscribers can also ask Siri to play different songs in different rooms or the same song everywhere, without ever leaving the room. Just like iPhone and iPad, HomePod will be able to communicate with other AirPlay 2-enabled speakers when they become available, so Siri can control music playing on speakers from Bang & Olufsen, Bluesound, Bose, Bowers & Wilkins, Denon, Libratone, Marantz, Marshall, Naim, Pioneer and Sonos.
When it comes to setting up a stereo pair, when a second HomePod is set up in the same room, the user is prompted whether they would like to form a stereo pair, and in just a matter of minutes, the room is filled with amazing audio. Even though these two speakers act as one, each HomePod communicates with each other so that only one speaker responds to Siri requests. With an A8 chip in each speaker, each HomePod is able to play its own audio channel — left or right — while separating out both the ambient and direct energy.
To install iOS 11.4, update your iPhone or iPad. Then you can upgrade your HomePod by:

The HomePod is arrives in Canada, France and Germany starting June 18.