Apple Rejects Steam Link On iOS Due To “Business Conflicts” 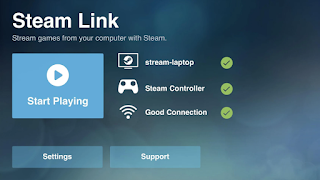 Valve's Steam Link was set to release on mobile this week. While the beta version released on Google Play with out issue, the iOS app appears to have hit an unexpected problem. Valve said in a statement that Apple approved then withdrew it from the App Store:
"On Monday, May 7th, Apple approved the Steam Link app for release." It continues: "The following morning, Apple revoked its approval citing business conflicts with app guidelines that had allegedly not been realized by the original review team."
Steam Link is as a way to stream PC games onto TV, allowing players to enjoy their favorite titles from the comfort of their couch. Valve apparently tried to appeal the ruling, pointing out the abundance of free game-streaming apps already live in the marketplace. However, those pleas were overlooked.

"The team here spent many hours on this project and the approval process, so we're clearly disappointed. But we hope Apple will reconsider in the future."
Apple hasn't detailed the reasons behind its rejection, but Moonlight and Remotr are available as alternatives.