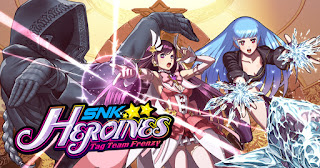 We finally have a release date for SNK Heroines: Tag Team Frenzy. The game is coming on September 7th and should be extremely entertaining. The news was announced during PAX East.
SNK HEROINES Tag Team Frenzy arrives on Nintendo Switch and PS4 on September 7, 2018 in North America and Europe!
Plus, another fan-favorite joins the roster! Meet Shermie, a beautiful and hard-hitting grappler making her graceful return to the ring. Since first appearing in The King of Fighters ’97, she has remained a popular pick among players and is ready to take her place as the belle of the brawl with her devasating suplexes and bone-crunching drop kicks! Be careful, because one wrong move and you’ll get a taste of her Dream Finish, the Inazuma Leg Lariat!
Check out her special reveal trailer now, and get ready to take her on when SNK HEROINES arrives on Nintendo Switch and PS4 (digital) this September!