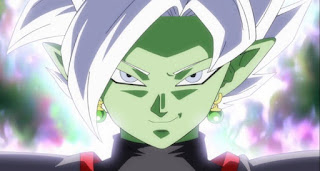 This weeks edition of the japanese magazine V Jump, is set to reveal the next Dragon Ball FighterZ DLC character. Reports are circulating on Japanese and English social media that the newest character shown in early leaks appears to be Merged Zamasu.
Spoilers ahead .
Merged Zamasu is the earring-powered fusion of both Goku Black and Future Zamasu. The two decided to fuse after Future Zamasu realizes that, despite being immortal, he can still be imprisoned. The fusion combines his immortality with Goku Black's power in a form that mostly resembles Future Zamasu with Goku Black's height and some other features. Characters note that Merged Zamasu is powerful beyond comprehension in a very literal sense. In terms of fighting style, Merged Zamasu has mutations from his fusion being unstable, and also a wall of light protecting him that has to be brute forced through. It's not clear from what inspirations the game will draw from if he is indeed the next DLC character. So far, the only two revealed DLC characters have been Bardock and Brolly, both of whom have been released already.