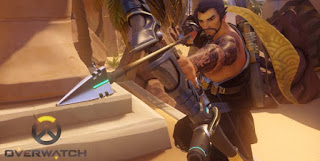 Back in February Blizzard was teasing that big Hanzo changes were coming, and after lots of testing, the team is finally testing some changes in the PC Public Test Realm.
The biggest change is the removal of his Scatter Arrow ability, which fired one arrow that split into several on impact. The new ability, Storm Arrows, has him firing six arrows with reduced damage in rapid succession. He also gains a horizontal leap he can perform mid-air. "The goal of these Hanzo changes is to allow him to have new options and maintain his high damage output, while removing the frustration of fighting against the old Scatter Arrow," the developer said in its notes.
The update also brings with it a new Escort map: Venice's Rialto area in Italy. "Rialto was home to Talon agent Antonio Bartalotti’s sprawling estate and the backdrop to the infamous 'Venice Incident,' a turning point for Overwatch and Talon," Blizzard says of the map.
Several other characters get some attention, as well. Brigitte's Shield Bash, Genji's Deflect, Junkrat's RIP-Tire, Tracer's Pulse Bomb, get nerfs, while Lúcio's wall-riding gets some tweaks to make it easier to perform but slightly less effective. Check out the patch notes here.