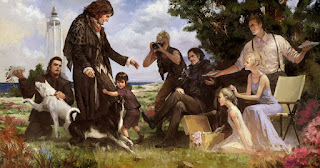 PAX East is currently underway, and news has emerged from a dedicated panel at that show about the upcoming plans for Final Fantasy XV. If you thought we were done with new content for the game you’re wrong. Square Enix has a bunch of new DLC drops in the works.
Four new episodes are scheduled, including ones that focus on Ardyn, Lunafreya, Noctis, and a shorter side story episode that showcases Aranea Highwind. Across the scope of the episodes, the theme being explored is that of an alternate grand finale to the storytline.
Square Enix also announced new features like raid bosses for the Comrades expansion, as well as plans for a standalone release of the multiplayer mode. On top of all that, the company has announced a collaboration between Final Fantasy XV and Shadow of the Tomb Raider. No other information was revealed other than that it’s “coming soon.” This will be the 3rd collaboration for Final Fantasy XV following Assassin’s Creed and Half-Life outfits.

The future looks stronger than ever for #FFXV ! The Developer panel at #PaxEast2018 was able to peel back the curtain and show us what mods are capable of, and even revealing to us Episode Ardyn, Aranea, Luna and Noctis! Stay tuned for more information! pic.twitter.com/x8E4jx8oHk
— Final Fantasy XV (@FFXVEN) April 6, 2018