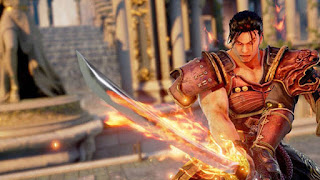 During The Game Awards 2017, Bandai Namco announced that fighting franchise Soulcalibur is coming back with Soulcalibur VI. Coming in 2018, the title will release on PS4, Xbox One, and PC . A fresh trailer rolled out alongside the announcement, showing off some classic characters (Sophitia and Mitsurugi) and action that the series is known for. Check out the announcement trailer below.
Posted by 9To5TechNews at 12:12 PM