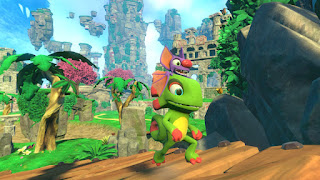 Playtonic has confirmed that Yooka-Laylee for Nintendo Switch is finally arriving on December 14th. Here’s what the team had to say on the official blog:
“Available to pre-order from the Nintendo eShop from December 7, Yooka-Laylee for Nintendo Switch features a shed-load of polish and updates, including single-JoyCon play across all eight multiplayer games, a custom Achievement system, plus the ability to take our collecting duo on the go without the need for extravagant extension leads!
The Playtonic team has spent many, many months optimising Yooka-Laylee for Nintendo Switch (with technical help and support from Nintendo and Unity themselves!) and we believe we’re delivering a version Nintendo fans can be proud of.
Players can expect a quality experience both on and away from the television and on top of that, Switch players will benefit from the huge list of updates we’ve added since launch such as a brand new camera mode, control improvements, menu options, music… and a lot more!


To celebrate the announcement, we’ve launched a fan art competition on our Facebook and Twitter pages to win one of three ultra-rare 64-Bit Editions. Click across for a chance to enter!”