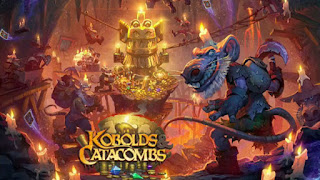 During the Blizzcon 2017 opening ceremony, Blizzard announced a new Hearthstone card set. Kobolds and Catacombs is a 135-card set focused on finding loot, avoiding traps, and fighting bosses in labyrinthine underground corridors.
The expansion's Dungeon Run single-player mode appears to play out like a choose your own adventure dungeon crawler. Each time you venture into the dungeon, 8 random bosses are selected randomly to appear in that catacomb. You start with a 10-card deck, but each time you defeat a boss, you earn new cards that go directly into your arsenal, increasing your power each game. If you lose, your deck is thrown away and you have to start over with a brand new deck. The mode is free, and you don't need to own any cards to play.

Kobolds and Catacombs also introduces new deck mechanics. The new “Recruit” keyword can be used to rip minions out of your deck directly onto the battlefield, and should create interesting deck building choices, will you put just a few specific minions in your deck to ensure you hit your critical targets, or tailor your deck around recruiting minions of a certain cost? Each class in the expansion can gain access to a potent legendary weapon over the course of their journeys as well. Marin the Fox, the first card in the set, arrives for free on Monday for everyone who logs in. Those who are attending Blizzcon gets a gold version. The Kobolds and Catacombs expansion is coming this December.