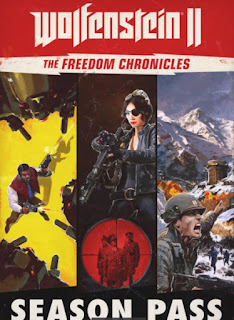 Bethesda has provided a few dates and details on Wolfenstein II's upcoming DLC. The Freedom Chronicles, features a trio of heroes who take on the Nazis their own way. The first main episode starts in mid-December, and it will be available a la carte or as part of the game's $24.99 season pass. If you're interested in the game's post-release content and didn't preorder the game, getting the season pass is also the only way you can get the Episode Zero DLC, which introduces each of the upcoming DLC's main characters.
Here's a quick look at each chapter, straight from Bethesda:
The Adventures of Gunslinger Joe
December 14
As former professional quarterback Joseph Stallion, smash through Nazi hordes from the ruins of Chicago to the vastness of space!
The Diaries of Agent Silent Death
January 30
As ex-OSS agent and assassin Jessica Valiant, infiltrate Nazi bunkers in California and discover the secrets of Operation San Andreas!


The Amazing Deeds of Captain Wilkins
March 2018
As the US Army’s renowned hero Captain Gerald Wilkins, embark on a mission to Nazi-controlled Alaska to dismantle Operation Black Sun!
Posted by 9To5TechNews at 3:06 PM