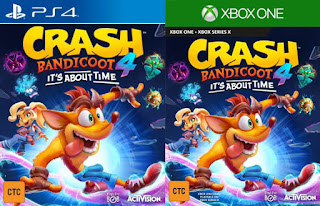 It looks like a new Crash Bandicoot game announcement is on the horizon. The Taiwan Digital Game Rating Committee has rated Crash Bandicoot 4: It’s About Time for PlayStation 4 and Xbox One. It is developed by Spyro Reignited Trilogy studio Toys for Bob.

Here is the description that accompanies the rating:
“Crash is relaxing and exploring his island in his time, 1998, when he finds a mysterious mask hidden away in a cave, Lani-Loli. The mask is one of the Quantum Masks and apparently knows Aku-Aku, Crash’s mask friend! With the Quantum Masks returning and a Quantum Rift appearing near our heroes, they decide to bravely head through to different times and dimensions to stop whoever is responsible.”

Activision has began teasing the announcement of a new Crash Bandicoot, as members of the press reported receiving a 200-piece puzzle that depicts a new mask which you can see on the leaked cover art.

I received an Interesting Package from "Your Favorite Bandicoot". Inside was a Puzzle. When I put it together it made a new Mask... Yet it's Familiar.