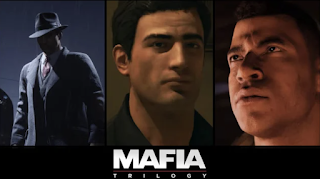 UPDATE 7/9/20 - Developer Hangar 13 explains that the delay has been caused by difficulties caused by working amid the effects of the COVID-19 pandemic. A statement says that "finalizing everything in time for that launch date has become increasingly challenging", and "the last thing we want to do is compromise the quality of the experience." Hangar 13 will show an extended look at Mafia: Definitive Edition gameplay on July 22.


UPDATE 5/19/20 - Mafia II and Mafia III are available right now, and the original Mafia (which is a remake) is scheduled for August 28.
The Mafia II and Mafia III definitive editions are available today digitally on PS4, Xbox One, and Steam for $30 each, but you can also get them bundled for $60 total. It should also be noted that if you already own Mafia III on steam, then it’ll automatically be upgraded to the definitive edition for free.

Original story - Publisher 2K and developer Hangar 13 released a teaser trailer that unveils Mafia Trilogy.
This series, beginning with the original Mafia in 2002, offers a gritty look at the world of organized crime over the course of three games, each one featuring a different protagonist. You can see these characters, like Vito Scaletta and Lincoln Clay in the trailer.
However, a pair of product pages appeared on the Microsoft Store for Mafia: Definitive Edition and Mafia II: Definitive Edition. Beyond that, the screenshots on the page for Mafia: Definitive Edition highlight the visual overhaul, which represents a major step up from the original.

If the listing information is correct, the definitive edition of Mafia II is launching on May 19 (the same day the teaser trailer promised more news). Mafia: Definitive Edition appears to be hitting on August 27 or 28 – the page lists both dates in different places. Guess we’ll just have to wait until May 19 to see what 2K announces.
Posted by 9To5TechNews at 11:14 PM