Borderlands 3 Is Getting Two Big Content Updates In June 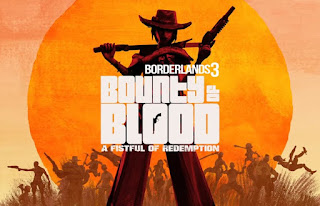 Borderlands 3 is getting two big content updates next month. On June 4, Takedown at the Guardian Breach is a new endgame gauntlet that sounds harder than previous takedowns. Like previous takedowns it’s a free update and you’ll be traveling to the planet of Minos Prime to uncover the source of a mysterious Guardian signal. The reconnaissance mission features new enemies, low-gravity platforming sections, environmental puzzles, and a deadly mini-boss and a wild final boss. Takedowns are meant to be played with four players, but it will scale to the number of players you have.mIf you survive, the rewards should be filled with sweet sweet loot, including themed-weapons, gear, and collectible cosmetics.

Then on June 25, comes the game's third DLC campaign, Bounty of Blood: A Fistful of Redemption. Here, you're placed in the all-new setting of Gehenna, a harsh desert, which happens to be the home of a vicious gang of bandits called The Devil Riders. The gang has been tormenting a small town called Vestige, putting a bounty on their head for you to claim. You'll also want to help fix the damage done by building the town back up to its former glory through story missions and crew challenges. Just think Borderlands: The Western.

Bounty of Blood: A Fistful of Redemption, #Borderlands3’s next DLC, arrives June 25. Travel to Vestige, a small town on the harsh desert planet of Gehenna to claim a bounty on the vicious beast-riding gang known as the Devil Riders.