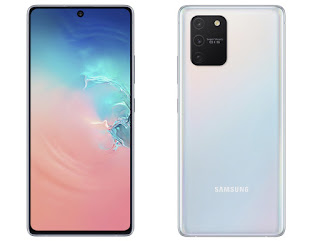 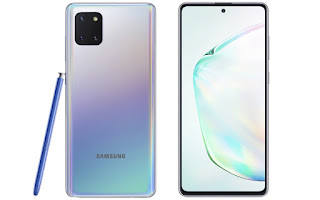 Samsung has announced the Galaxy S10 Lite and Note 10 Lite, two phones which the company claims will be more affordable takes on its 2019 flagships. Both devices feature 6.7-inch bezel-less AMOLED display with a cutout for a 32-megapixel selfie camera. As a result, the S10 Lite features a bigger display than either the S10 or S10+, which had 6.1-inch and 6.4-inch displays respectively.
As for the Note 10 Lite, its display slots in between the Note 10 and Note 10+'s 6.3-inch and 6.8-inch screens. Although, the biggest difference between all the displays is that the screens of the two Lite phones are lower resolution 1080p panels, instead of QHD panels like on Samsung's flagships. The phones feature a massive 4,500mAh capacity batteries, the lower resolution displays should help with battery life. It's also worth pointing out Samsung hasn't said whether the screen it sourced for the Lite models features HDR10 support. For biometric authentication, the phones include both an in-display fingerprint sensor and face recognition.
Both phones include triple main camera arrays, though they differ in the types of lenses they offer. The S10 Lite includes a 48-megapixel wide-angle, a 12-megapixel ultra-wide and a 5-megapixel macro camera. The Note 10, meanwhile, features a 12-megapixel wide, 12-megapixel telephoto and 12-megapixel ultra-wide camera. Notably, neither phone features the variable aperture main lens of Samsung's flagships. In another design change from Samsung's earlier models, both the S10 Lite and Note 10 Lite have square camera bumps, instead of the horizontal ones of their predecessors.
One area where the two phones differ is that they feature different processors. Samsung hasn't said the exact model of chip that's in each phone, but the S10 Lite includes a 7-nanometer octa-core processor, while the Note 10 Lite features a 10-nanometer octa-core chip. Depending on the market and operator, the phones will include either 6GB or 8GB RAM to support their processors.
When it comes to storage, the two phones come with 128GB standard, with no option to buy more built-in storage. However, both models include microSD expandability, allowing you to add as much as 1TB of additional storage to the phones.
The company will sell the S10 Lite in three colors -- "Prism White," "Prism Black" and "Prism Blue." The Note 10 Lite will be available in three colors, as well: "Aura Glow," "Aura Black" and "Aura Red."