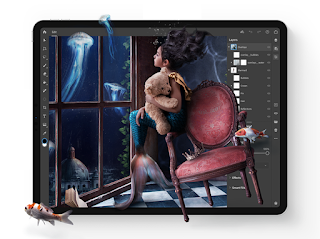 Adobe has officially launched Adobe Photoshop on iPad, while also previewing Adobe Illustrator on iPad and the all-new Photoshop Camera. Photoshop for iPad is free (There is a 30-day free trial to try out the app. After that, it requires a $9.99 per month subscription) and is available at the Apple App Store.

Adobe Photoshop on iPad brings core compositing and retouching workflows to the tablet. It features full PSD interoperability, a touch-based UI, cloud document access and the power to work on real world, multi-layered creations. Developed specifically for tablets, Photoshop on iPad is an intuitive, more accessible entry point to Photoshop for new users as well as a great companion app for professional creators.
Adobe also previewed the upcoming version of Illustrator for iPad. Designed with a more intuitive interface, the iPad update will make it possible for users to work with the same documents across devices and have access to Adobe Stock, Adobe Fonts and all Creative Cloud Libraries.