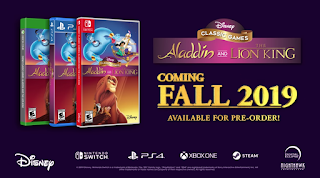 Disney announced that it has been working with publisher Nighthawk Interactive and developer Digital Eclipse to release remastered versions of Aladdin and The Lion King in one $29.99 bundle. There’s a number of improvements including “upscaled graphics to support high definition displays and additional upgrades to enhance playability”
You will also get “save states, a new rewind feature, level selection, invulnerability, and infinite lives.” This classic game collection also includes extra of versions of each titles including the SEGA Mega Drive, Game Boy, and Super Game Boy releases alongside The Lion King Super Nintendo version. You’ll also get the “final cut” of Aladdin plus the game’s 1993 trade show demo. The bugle releases on October 29.