Marvel Ultimate Alliance 3 DLC Coming At The End Of September 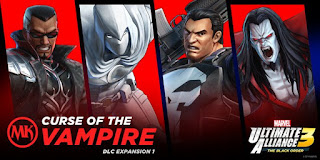 Nintendo has announced that the first downloadable content pack for Marvel Ultimate Alliance 3: The Black Order will launch on September 30th. the DLC pack is titled Curse of the Vampire and will be free to those who own the Expansion Pass. The DLC pack will feature Blade, Moon Knight, Punisher, and Morbius and also includes a number of new co-op missions in Gauntlet Mode.


DLC Pack 1 of the @MARVEL ULTIMATE ALLIANCE 3: The Black Order Expansion Pass launches 30/09, as the Marvel Knights join the alliance! You can also take on an intense series of co-op missions in the new Gauntlet Mode! #MUA3 #NintendoGC