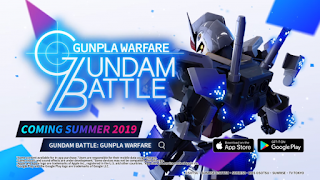 Gundam Battle: Gunpla Warfare features 3D action battles featuring Gunpla. Your aim is to win the Gunpla Battle Tournament by collecting more parts by defeating other players. In terms of combat, controls are simplified compared to the  Gundam Breaker games on PS4 and PC. In terms of story, Gundam Battle: Gunpla Warfare has an original story unlike many other licensed games. You will be able to relive some key moments from the Mobile Suit Gundam anime series.