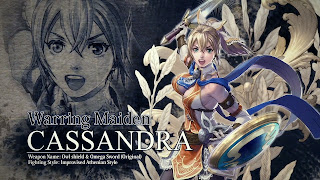 During EVO 2019, Bandai Namco revealed the final character of the first round of DLC characters for Soul Calibur VI, Cassandra. She’s free for season pass owners now or you can purchase her as standalone DLC.
We also got our first look at the second round of DLC, and it starts off with a guest character, Haohmaru from Samurai Shodown. We didn't see him in action, but we’ll likely get gameplay of him at a later date.