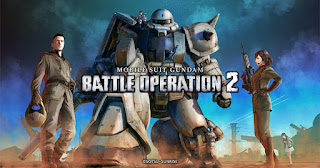 Bandai Namco has announced that Mobile Suit Gundam: Battle Operation 2 is coming to North America and Europe later this year. It's a free-to-play team-based action-shooter that features both mobile suit and infantry combat. It originally released in Japan baack in 2018. It should be noted that the Japanese, Hong Kong, Taiwanese, and Korean versions of the game already feature English text support. If you've got a PlayStation account associated with any of those regions, you can give it a shot before it releases in America and Europe.