Microsoft’s Next Console Is Project Scarlett, Releasing Next Year 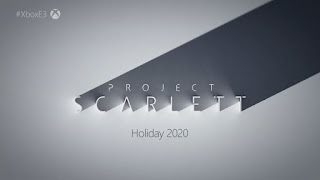 During Microsoft's E3 presentation, Microsoft's next-generation console is code-named Project Scarlett, and is coming next year. According to footage shown, Project Scarlett is 4X more powerful than the Xbox One X. The next-gen console has an array of technical leaps forward, featuring 8K capability and the ability to run at up to 120 frames per second. It has a solid state drive to reduce load times and make it easier for players to get into the action and stay there. Project Scarlett will also leverage Microsoft's cloud capabilities, allowing players to play across different devices and platforms. Halo Infinite will also launch along side the new system in Holiday 2020.