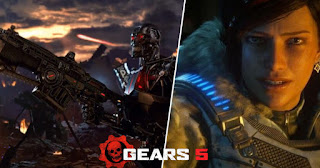 During Microsoft's E3 presentation, two new trailers for Gears 5 were shown. One focused more on the story aspects of the game, while the other expanded on the future of multiplayer.
Those who pre-order the game and play it within the first week will be able to play as the Terminator, along with a few surprises and rewards, but specifics were not given. You can also play as the Terminator if you have Game Pass or Game Pass Ultimate
Gears 5 is set to be released on September 10.