Death Stranding Get A Release Date And Crazy Collectors Edition

Death Stranding finally has release date and along side a new trailer. The game will release on November 8, 2019. The game is up for pre-order, and there are four different versions of the game that can be purchased: the Standard Edition, Special Edition, Digital Deluxe Edition, and Collector's Edition, as revealed on the PlayStation Blog.
The Standard Edition ($59.99 USD) includes the game and a series of golden pre-order bonuses: gold "Sam" sunglasses, gold hat, gold Speed Skeleton (which increases the speed of your in-game movement) and gold Armor Plate (which offers increased damage protection). 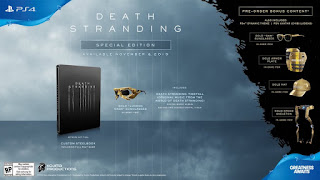 The Special Edition ($69.99 USD), includes the Standard Edition bonuses, plus a Steelbook case, a gold "Ludens Mask" sunglesses set earned through gameplay, the soundtrack, and a behind-the-scenes video.
The Digital Deluxe version ($79.99 USD), only available for download, includes all previously mentioned bonuses, plus a gold Power Skeleton (which enhances your ability to lift heavy cargo), the gold All-Terrain Skeleton (which enhances your ability to balance on uneven terrain) and a level 2 upgraded version of the gold Armor Plate. 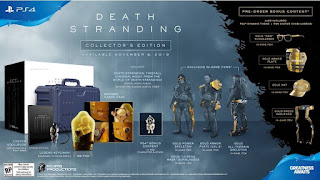