There Has Been 3 Million PSVR Units Sold 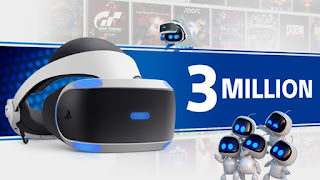 Sony Interactive Entertainment has announced on the PlayStation Blog that it has sold 3 million PSVR systems.
The company also announced 2 new games. The first is a boxing game called Creed: Rise to Glory, and the other is a shooter called Evasion. Check out the PS Blog article for more.